After successfully finishing an over-night print job, I switched off the machine as usual. Some time later, I wanted to start another print job and switched the UM3 back on again. It happened that the machine won’t boot any more.

So, after switching on the machine, the Ulimaker text logo appears on the front panel but nothing else happened any further.

In fact. the machine was not dead but inoperable, as the standard menu to enter commands does not appear any more.

In fact, the only thing I changed in between was a new Cura version.

In order to understand the problem and come behind the scene, I did the following actions:

The UM3 has a standard Olimex board running on a linux operating system (open source), so after unscrewing the cover (right behind the network connector) on the backside of the machine, the HDMI cable connector becomes accessible.

Plugging the HDMI cable at one side to the UM3’s olimex board and on the other side to a monitor, allows to view the boot sequence messages of the operating system.
Output looks like the following: 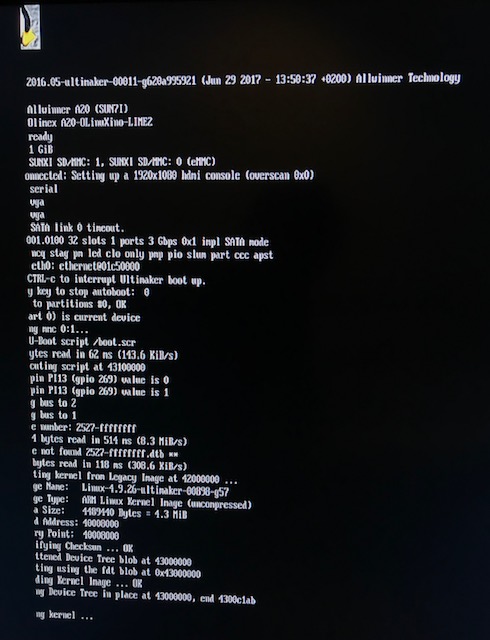 How to solve the problem:

Assuming that the problem is related to a broken boot image or similar, the solution is to create a new bootable image on a micro sd card, boot the machine and later on update the firmware.

Once the reboot has finished, UM3 asks to do some calibration related to the lifting mechanism of the 2nd printhead.

What's on this page: